As a city of Xinjiang, there are many ethnic groups in Aksu, thus leading to various cultures flourished there. And due to its special location and history, there are some special cultures that are totally different from that of other places. Besides, there is a snow mountain in Aksu, and so there are bountiful waters in Aksu, thus it possesses picturesque scenery and some rivers.

Other Destinations in Aksu

As a frontier city, Aksu Prefecture is blessed with many tourism resources. And most of them are unique. Its cultural resources are abundant because many small counties established and fell down here, some cultures flourished here. There are some famous scenic spots, such as Kuqa Temple (库车大寺), Kuqa Royal Palace (库车王府), Thousand Buddhas Cave of Kizil (克孜尔尕哈千佛洞), etc. Besides, there are a lot of natural resources because of its geography, and many of them are national 4A scenic spot, like [...]

Aksu Prefecture is a little big and most must-see spots scatter in different places. Therefore, it is necessary for visitors to map out their tour routes to visit more attractions within tour time. There are some suggestions. First of all, visitors could experience different cultures by visiting scenic spots, like Kuqa Temple (库车大寺), Kuqa Royal Palace (库车王府), Thousand Buddhas Cave of Kizil (克孜尔尕哈千佛洞). These scenic spots reflect different cultures, like Qiuci culture (龟兹文化) and Duolang culture (多浪文化). Second, travelers could [...] 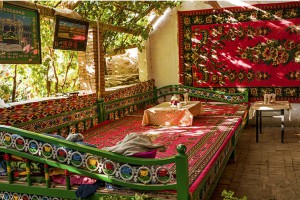 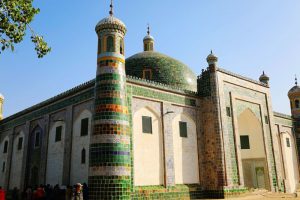 According to seasons, it is dry and windy in spring, accompanied by floating dust and sand. In summer, there are many thunderstorms. And sometimes there are torrential rain, hail and so on. The weather is nice in autumn. In winter, it is relatively warm, with less rain and snow. The monthly 24-hour average temperature ranges from −7.8 °C in January to 23.8 °C, and the annual mean is 10.25 °C. Its precipitation totals only 74 millimeters annually, and mostly falls [...]

There is some detailed information on Aksu’s transportation that will help you a lot in your trip to Aksu. How to Get & Leave Aksu By Air There are two airports in Aksu and both of them are not big. One is Aksu Wensu Airport (阿克苏温宿机场) and the other is Kuche Quici Airport (库车龟兹机场). Here are some detailed information about Aksu Wensu Airport (阿克苏温宿机场). It is located in the north of Aksu City, and it’s 10 kilometers away from the downtown area. [...]

Corban Festival (古尔邦节) Time: December 10th of the Islamic calendar It is a Muslim festival. In the early morning of the festival, Muslims bathe and then wear neat and formal clothes to go to the mosque to attend their ceremonies. Whether in the cities or the countryside squire, grand Maxrap dancing shows are held. Colorful and wonderful decoration is made during the event. And there are all kinds of snacks as well. Except the Muslims, other nationalities like Kazak, Kirgiz, Tajikistan, [...]

In order to help tourists not get lost and have a better travelling experience in Aksu, here are some helpful maps, like Aksu city map, Aksu Prefecture map, Aksu in Xinjiang Map, Aksu transportation map, Aksu tours map, Aksu tourist attractions map and map of scenic spots around Aksu, Aksu travel map, etc. through which you can probably know how to get to Aksu and what to discover there. [...]